Want to learn python? It turns out that Google has put together a great series of lessons, videos and exercises that will help you get started quickly with using Python.  You can get to the courses at:

Very cool to see. A hat tip to the Hacker News mention of a blog post from Hartley Brody where he pointed out Google’s site.

P.S. Google also has a C++ class and a range of other tutorials and presentations available from:

My former colleague Justin Dupree just posted a new version of the Tropo-webapi-python package to Pypi at:

To install the package, assuming you have pip installed, you should be able to just type:

and then you can get started building Tropo applications that use voice, SMS, IM or Twitter as channels to communicate with people. The documentation for the Tropo WebAPI provides a full explanation of the API and also sample applications. Samples are also provided in the distribution.

The “tropo-webapi-python” package lives on Github at:

and those of you wanting to live on the edge can simply clone the repository from Github and use it there.

I’ll also mention that at this point I’ve completely stepped away from the maintenance of this ‘tropo-webapi-python’ package (as I’m no longer with Voxeo) and Justin and the Voxeo Labs team are now maintaining the package.

Have fun with it! I definitely enjoy creating Tropo apps using python!

Ever wanted to manipulate Git repositories directly in python? Well, okay… I haven’t really myself, but in writing about Google Code’s support for git yesterday, I noticed that they are using Dulwich, a native python implementation of git. Rather than wrapping command-line git with python scripts, Dulwich is a python module giving you direct access to a git repository. As shown in the Dulwich tutorial, creating a new repo is simply this:

Once a repo is created (or you connect to an existing repo), you can do what you would do with git at the command line: adding files to the repo, committing files, and changing files.

While I don’t know that I personally will use this… it’s very cool that Dulwich is out there for python programmers who want to interact with git repos. Very cool to see!

Earlier in the week I mentioned a quick python app I wrote to send SMS messages using SMSified. I’m storing that code and some other experiments up in a Github repo at:

If you are a Github user and also interested in building SMS apps, please feel free to “watch” that repo and follow along with my own experiments. Code will probably be a mixture of python and Node.js, with occasional other languages thrown in.

Today Voxeo[1] launched SMSified a new service that lets you use a really simple RESTful API to send text messages within the US for only 1 cent per message. I and other colleagues have been writing about SMSified on the SMSified blog and after writing a tutorial about using SMSified with curl, I figured I’d play around with python a bit and code up an example of sending a SMS via python.

So here it is… stored up in my Github account, but also here:

As you can see in the code, there are really only three lines of importance: the one building “apiurl”; the one urlencoding the data; and the one opening the URL. The rest are really just for the convenience of using variables.

The final line simply prints out the info included in the result JSON. I was going to (and still may) make that print out prettier or say something more… and if you are reading this sometime in the future, the version on Github may have already morphed and evolved into something different. The point is that now that you get JSON back, you can parse it and start to take action on it.

Anyway, this was just a quick sample app to experiment with SMSified. If you have checked out the new service, it’s free to set up a developer account and currently is free entirely during the beta period.

[1] In full disclosure, Voxeo is my employer.

Recently I was trying to debug a python app that ran on Tropo.com Scripting and made a web call back to an application on another server. I wanted to see exactly what was being sent in the HTTP POST rom Tropo to the other server… and that’s when my colleague Mark Headd pointed me over to PostBin.org:

Now you just do a HTTP POST to that URL and… ta da… the results of your post appear on the new webpage.

P.S. Obviously there is no language limitation here. I happened to use python because that was what I was debugging, but you can use PostBin with ANY language that is sending HTTP connections.

You just type in some python code and press the “Execute” button. Now, sure, it doesn’t have support for much outside the very core language… and you could get all of that by simply flipping to a terminal window and using python from the command line.

Still, it’s a fun way to be able to show people new to python what they can do… and a cool proof-of-concept of running python directly inside your web browser! 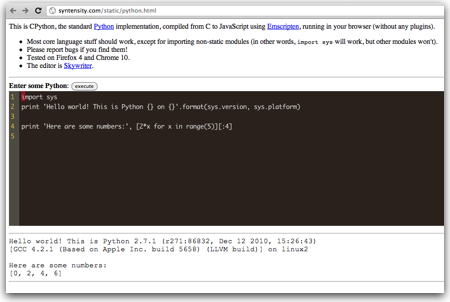 It’s funny… I’ve been writing small python programs for 10 or 15 years now (makefaq being perhaps the one most widely used), but in all that time, I had never set myself up with a PyPI account. PyPI, for those not in the python world, is the “Python Package Index” which lists all the uploaded packages and makes them easy to install onto systems. It’s sort of the python version of Perl’s CPAN, PHP’s PEAR or Ruby’s gems.

However, as I wrote about over on the Tropo blog, thanks to a developer suggesting we upload the Tropo WebAPI library to PyPI, I now finally have a PyPI account. My first (and currently only) submission is naturally:

Now that I’ve done that, I may take some of my other modules and upload them as well.

The cool part about this is that developers can now very easily install the Tropo WebAPI library and use it with their free Tropo account to start creating apps that use voice, SMS, IM, or Twitter for real-time communications (or near real-time, anyway). All they have to do is use one of these commands:

depending upon whether they prefer easy_install or pip to install packages.