Remember perl? The “scripting language” that was the one of the first that many of us used on UNIX to automate system administration tasks? And then was later used in the 1990s for a ton of web CGI programming and so much more? And that we could have so much fun with created “obfuscated” programs that looked like gobbledegook but actually did something useful?

I don’t hear much at all about perl these days… and my perception is that many folks are like me in that they moved on from perl to other scripting languages like python, JavaScript, Ruby, PHP and more.

So when ReadWrite Web published article “A Look at the Future of Perl 5.16 and Beyond“, I had to look out of perhaps morbid curiosity… “you mean, people still use perl?”

The slide set from Jesse Vincent embedded in the RWW article is interesting in that it does show the good amount of work being done by the perl faithful to bring more stability and progress to the perl language.

I commend them all for the work… it looks like really good things are happening. Is it enough to make me personally return to working with perl? Probably not, to be honest… but for the sake of all those people who still work with perl… and for people looking for a great multi-purpose programming language with deep roots and a huge base of documentation and usage… it’s good to see the language evolving again!

Ever wonder what programming languages are the most popular? One way is to look at a programming community and see what is being used within that space. A large community right now in 2011 is the people using Github for git repositories (and I am one of those) and Github nicely provides a URL showing the languages in use:

When I look at the chart at the time I’m writing this post, it looks like this: 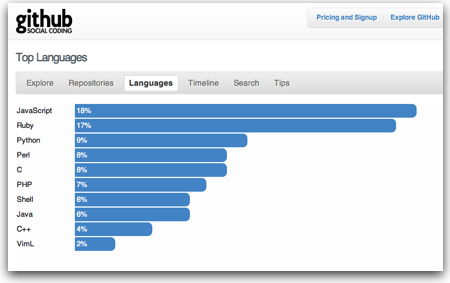 This is across 600,000+ developers and close to 1.8 million git repositories.

Given that historically many Ruby developers used git and Github, it’s not surprising to see Ruby there. With JavaScript, I have to wonder if its ranking is due to the phenomenal interest in Node.js and the heavy usage of git and Github within that community. Glad to see my old friend python hanging in there, too. The Microsoft languages like C# are missing… but then they simply may not be well represented within the Github user base.

Like any measurement this can only be taken as language popularity within the Github community. Measurement within another community would give different results. Still, the Github space is very vibrant and dynamic with lots of energy… it’s interesting to see what folks there are using.