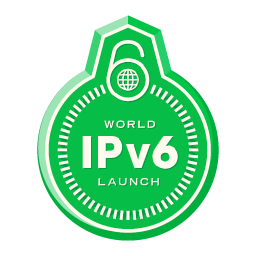 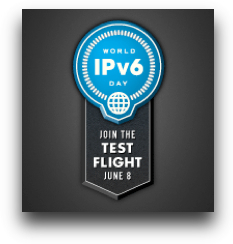 Just in time for World IPv6 Day, I’m pleased to note that Code.DanYork.com is now available over IPv6!

This site runs on WordPress and while WordPress itself works fine with IPv6, the trick was to find a web hosting provider that provided solid IPv6 connectivity.

After much investigation, I finally set up a basic web hosting account with Hurricane Electric. They’ve been in a leader in IPv6 deployment and have great interconnections to other IPv6 networks. They are also the folks behind Tunnelbroker.net, the free service I use to get IPv6 connectivity into my home office (using a setup for IPv6 with an Apple TimeCapsule that I described in another blog post).

I had this site hosted at another webhost, but through the sheer beauty of WordPress’s export and import features I was able to move the entire contents of the site over to Hurricane Electric without any problem.

For those curious, I’m running the site in WordPress’ Multisite mode as I’m planning to move more of my sites over to HE’s hosting. I’m using the Domain Mapping plugin to let me map different domains to different blogs. It’s all working wonderfully.

Now, unlike Google and Facebook, I’m not removing the IPv6 connectivity for this site after the 24 hours of World IPv6 Day are up. This site is live with IPv6 and will stay set up with IPv6 for the foreseeable future. (But having said that, I have nowhere even remotely near the visitors of the larger sites… and I have the luxury of not having to deal with large numbers of people who may have challenges connecting to my site.)

Welcome to the new IPv6 Internet!

P.S. If you want to learn more about IPv6, and in particular IPv6 and VoIP/SIP, you can visit the IPv6 Resource Page I put together over on Voxeo’s site. I’ve got some HOWTOs, tutorials, videos, links and more…

As an aside, over on the right navigation bar you’ll see a little “IPv6 detector” box that will show you either your IPv6 address or your IPv4 address (and yes, I blacked my actual address out in the screenshot because I’m just naturally paranoid): 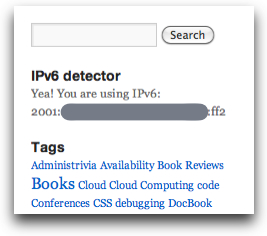 I’m using the “IPv6 detector” plugin for WordPress by Andres Altamirano, although I did alter it a bit. I shortened the text that was printed for an IPv6 address so that it would fit in my theme’s sidebar. I also removed the URL link and removed the extra links about IPv4 exhaustion.

Installation was a snap, though… I just installed it into WordPress and then went to the Widgets area of my theme and dragged it into the location where I wanted it.

Given all the writing I’ve been doing lately about IPv6 and about Node.js, it was only natural for me to try combining them. I pay for a VPS over at RapidXen and upon request they will provide you with an IPv6 address block (for free). So I’ve been using it as a base for my IPv6 experiments.

I should note that my home network is set up with IPv6 via a IPv6-to-IPv4 tunnel from Tunnelbroker.net. I previously wrote up how I configured IPv6 this way using an Apple Time Capsule WiFi access point

After using IPv6-test.com to verify that I have HTTP connectivity over IPv6 from my system at home, I tested connectivity to my VPS running a stock CentOS 5.5 Apache server. Here was the IPv4 result (and yes, I cover up IP addresses… a certain degree of paranoia comes with the territory of being in the security space):

Here was the same result with IPv6:

(If you aren’t familiar with using IPv6 addresses in web browsers, you just enclose the IPv6 address in square brackets. The specific browser I’m using is Google Chrome on a Mac, but this should work in all browsers.)

The next step was to shut down Apache and start up Node.js. For this experiment, I’m purely using the HTTP module in Node.js and not getting into any of the frameworks. Here’s the very basic code I’m using (also on Github):

After firing it up, connecting to the site via IPv4 was no problem:

And this is shown in the console:

Next I tried the IPv6 connection:

Oops. Predictably, the console log also did not show a new connection. I duplicated the test to make sure there wasn’t anything else funky going on, but had the same issue. Node.js wasn’t accepting HTTP connections via IPv6.

UPDATE: See below for the answer…

I was curious to see if the issue might be with the “http” module or if it was a broader issue. So I fired up a really basic TCP server example:

From my Mac, I then tried connecting via IPv4 and IPv6:

and found that IPv6 connectivity wasn’t supported in the “net” module.

Just to verify my testing method, I restarted Apache on the VPS box and used the same “telnet -6” command to hit port 80 on the box. I was able to connect and issue HTTP commands without a problem.

So it would seem that Node.js doesn’t work with IPv6, which is not terribly surprising given that (Node.js founder) Ryan Dahl indicated in the #node.js IRC chat yesterday that basically no IPv6 testing had been done. Looking in the Node.js ChangeLog, IPv6 support was added in some form back in June 2009:

But without looking at code diffs, it’s not clear to me what exactly was changed to support IPv6.

The next step is obviously to start digging around in code… given that I’m picturing it as a bigger task, I’m not sure when I’ll get the chance to do, but it would be a good excuse to take a look inside the Node.js code.

In the meantime, if anyone else reading this has some Node.js modules they’d like me to test with IPv6, or other ideas around this, I’m glad to help. Just drop me a note or hit me on Twitter.

UPDATE:The answer that I couldn’t find anywhere online came in a comment to this post from none other than Ryan Dahl… Node.js DOES work with IPv6, provided you give it the address!

All I had to do to make the original code work with IPv6 was add the IPv6 address to the “.listen(80)”, like this:

But of course this only listens on the IPv6 address and not on the IPv4 address, so I needed to refactor the code a bit and run two servers:

With that in place, it’s now answering on both the IPv4 and IPv6 addresses!

Many thanks, Ryan, for the answer!